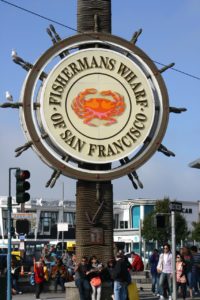 One of the most popular attractions in San Francisco is the Fisherman’s Wharf neighborhood. Roughly, it is made of the Northern waterfront region of the city. Running through the area is the F Market streetcar with others such as Powell-Mason running a few blocks from the area. It is a very good place to start if you have just visited the city and only have a day or two. Originally, it was known as Meiggs’ Wharf but got its current name from fishermen who always docked their boats in the area. It is an area famously known for its restaurants, beautiful setting, and shops. It is an exciting place to take a stroll and enjoy the taste of San Francisco. Also, you can go on a sightseeing cruise to enjoy great city views.

Today, there is a small fleet of boats that still docks there. However, you will not find any traces of the olden days’ waterfront life unless you get there early in the morning. The main trolling happening at the Wharf nowadays is for tourist dollars.

Fisherman’s Wharf is famously known for being the home of Pier 39. It is home to over 130 stores and other unique places. Additionally, it gives visitors a great view of the city.  Besides, it hosts the Ghirardelli Square and Madame Tussauds Wax Museum. The Cannery shopping center and the Maritime National Park are also hosted at the Fisherman’s Wharf. Another thing that is worth your attention is the antique arcade at Musee Mecanique. It is located at Pier 45 and features numerous ancient amusements such as mechanical carnival, guffawing bust, and fortune-tellers.

Other attractions in the area include USS Pampanito. This was a Navy Ship in the United States named after the pompano fish. Today, the ship is a historic landmark in the Maritime National Park in San Francisco. Fisherman’s Wharf hosts various events in San Francisco including the world-class display of fireworks every July 4th. Others include air shows which feature the Blue Angels.

While some people love Fisherman’s Wharf, others can’t get enough of it. Many people argue that it is a point that one has to see at least once in their lifetime, something I agree with. Some traces of old-school characters of San Francisco can still be traced in the area, features that you will always enjoy. Most specifically, you will enjoy the seafood supplied by the street vendors who serve piles of fresh crab. While still there, get a chance to walk through the World War II submarine, the Rainforest Café, and blue bars which offer excellent entertainment that amuses everyone.

If you get stuck inside one of Fisherman’s wharf parking garages and need roadside service think about using auto towing as they service the entire peninsula.

You can explore Lands End next to Vista del Mar, San Francisco with ease of access in the city. Check out the link to read more about the area in depth for surprises and information.

So many great places to visit in San Francisco you really need a week minimum. Legion of Honor is another great museum to visit and is within Sea Cliff, San Francisco neighborhood. Better to call ahead to make sure they don’t have any special events going on. 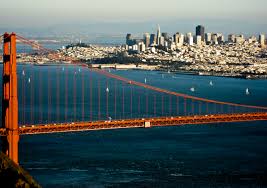 You can make SF a better place by continuing to offer your tourism dollars to places such as the Legion of Honor.

The Legion of Honor is one of the museums in San Francisco well knows for fine arts exhibits. The name is derived from both the building where the museum is located and the collections it houses. It is depicted as San Francisco’s most exquisite museum. The museum was a gift of a wealthy philanthropist and socialite in the city who was popularly referred to as ‘Big Alma’. She convinced her rich husband to donate the museum to San Francisco city. Her great love for Parisian things resulted in the museum taking on a design resembling one historic building in Paris.

The Legion of Honor is located in Lincoln Park. The park is a wonderful space with coastal woodlands and a golf course. It makes for a gorgeous place to take a leisure walk. Outside the Legion of Honor, visitors can follow a path right along the highway. This path is packed with spectacular outlooks and perfect ocean vistas onto the Golden Gate Bridge. If you are out for more adventure, you can take the hike that will take you the End Trail. The trail which is cited on the cliffside with rugged terrain enables one to enjoy the panoramas of the Bridge and Pacific Ocean views.

One of the most popular exhibitions at the museum includes ‘The Future of the Past’. During this exhibition, modern medicine meets ancient Egypt. The exhibition has gained much popularity due to its unique scientific techniques used in the exploration of the fine arts. A team composed of physicians, museum curators, conservators, Egyptologists, and scientists has learned more about the lives of the mummies. The main focus was on how the mummies lived, died to how they went through preparations for eternity.

One of the significant scholars to run more studies on the museum is Rebecca Fahriq, a member of the medical school at Stanford University. Among others, she conducted computed tomography scans of the mummies revealing very much unknown secrets. The exhibition further includes information about the Irethorrou lifestyle. This was a priest from a famous family living in middle Egypt. He lived about 2,600 years ago. The studies involved his religion, the society where he lived, and the beliefs of his time.

In the museum, visitors can examine the mummies using a virtual and interactive dissection table. It is provided by the Anatomage, a medical solution company in San Jose. Also displayed in the museum are tomb furnishings and beautiful amulets.

Try smiling as you walk around the city smiling even at complete strangers. Avoid long stern faces, whether the strangers smile back or not it doesn’t matter, what matters is one person will smile back. Also, people living in the streets always spare some change for them.be the reason someone does not sleep on an empty stomach.be the reason somebody else is smiling. In addition, volunteer in the city’s events to help. Read this interesting fact how much money do you need to live comfortably in San Francisco? This will provide you a real comparison.